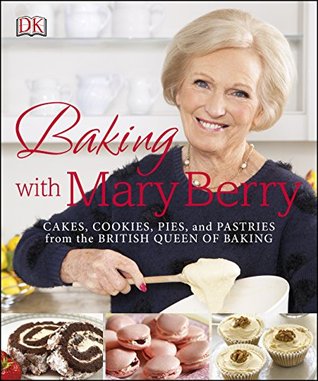 Baking with Mary Berry: Cakes, Cookies, Pies and Pastries from the British Queen of Baking

Baking with Mary Berry draws on Mary's more than 60 years in the kitchen, with tips and step-by-step instructions for bakers just starting out and full-color photographs of finished dishes throughout. The recipes follow Mary's prescription for dishes that are no fuss, practical, and foolproof--from breakfast goods to cookies, cakes, pastries, and pies, to special occasion desserts such as cheesecake and soufflés, to British favorites that will inspire.

Whether you're tempted by Mary's Heavenly Chocolate Cake and Best-Ever Brownies, intrigued by her Mincemeat and Almond Tart or Magic Lemon Pudding, or inspired by her Rich Fruit Christmas Cake and Ultimate Chocolate Roulade, the straightforward yet special recipes in Baking with Mary Berry will prove, as one reviewer has said of her recipes, "if you can read, you can cook."

Author Bio:
Mary Berry is one of the UK's best-loved and most respected cooking writers and bakers, with more than 80 books to her name and over 6 million copies sold. She is a judge on the primetime ABC series The Great Holiday Baking Show and the PBS series The Great British Baking Show, based on the hit BBC TV program (The Great British Bake Off). Her focus on family food and on recipes that are no fuss, practical, and foolproof have won her a legion of fans worldwide. She lives in England and has five grandchildren--with whom she regularly bakes.

The Homemade Pantry: 101 Foods You Can Stop Buying and Start Making

That's Not a Thing

The Perfect Cake: Your Ultimate Guide to Classic, Modern, and Whimsical Cakes

50 Simple Soups for the Slow Cooker

The Mystery Writers of America Cookbook: Wickedly Good Meals and Desserts to Die For

The Princess and the Pea: A Very Short Tale

Simple Cake: All You Need to Keep Your Friends and Family in Cake [a Baking Book]

Baking with Mary Berry: Cakes, Cookies, Pies and Pastries from the British Queen of Baking Reviews

Mary Berry is an English food writer and television presenter. After being encouraged in domestic science classes at school, she went to college to study catering. She then moved to France at the age of 21 to study at Le Cordon Bleu school, before working in a number of cooking-related jobs.